Let us show you in advance three designs out of the six Second Prize winners!
First, the Warrior by “AMIR AKIRA”, which features a lion, king of all beasts, the Cleric by “ns 13tokaido”, which was shaped after the Ultimate Weapon, and the mage by “Fluffle Duff”, which feels like it just stepped out of a Sci-Fi movie! 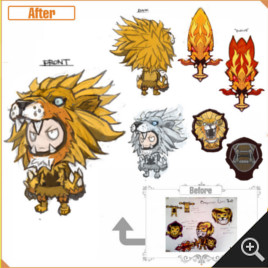 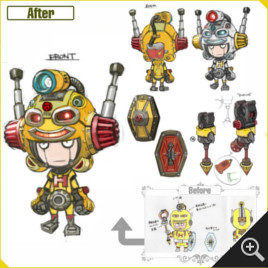 These designs barely missed the First Prize, but all of them are amazing sets with fascinating concepts!
We are looking forward to introducing you the in-game 3D models very soon.
It’s exciting to see the users’ original designs melting into the world of Happy Wars!

The items are planned to be released within a month, so please be patient a little longer!

* The other three Second Prize and the Special Jury Prize art work from the Art Director are in preparation.