Happy Wars major update for Xbox One and Xbox 360 is available!
In this update, some useful information is added to the Lobby, the tutorial is renewed for clear learning, and there are many more features added/modified for a better Happy Wars life.
Please read the information below for more details.

” is newly appeared on equip items which have the maximum value in all their parameters.
We named “High Grade Item” to the items with “High Grade Marks.”

If you have any “High Grade Items” it’s worth it to keep them!
At the beginning, you can check whether you find “High Grade Mark” in your item storage.


Four Features Are Newly Added to Matching Lobby!
・The text “Players Needed” displayed before all players have been found.
・Elapsed seconds during matchmaking.
・Estimated matching time.
・Advertising image of the current event and other.
Happy Wars multiplayer became more familiar and friendly with the new matchmaking screen.
Elapsed seconds and estimated time are especially functional when you change the equipment during matchmaking. 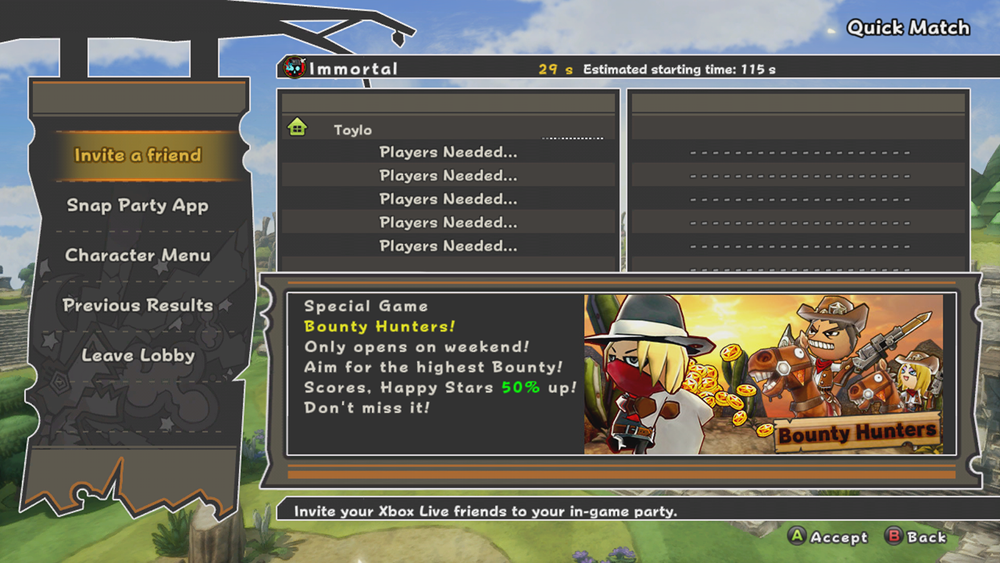 “Special Time” has been added
In Game Home, we set a 24 hours countdown timer before upcoming events.
Previously you had to return to the title screen when the Special Game opening time arrives, but from now on, you can play it smoothly without going back to the title screen.
Moreover, a “Special Time” banner is displayed during the event.
You are able to join the Special Game right away without checking the clock!


Warrior’s Skill “Shield Charge” has been adjusted
We modified the “Shield Charge” a little bit to make it more convenient
・Shortened the staggered time when hit by the skill when it is not charged or at level 1.
・Slightly extended the charging time between level 1 and 2.
・Slightly reduced the charging time between level 3 and 4.
・Shortened the attacking distance when the skill is activated without charging